Canning your own made to order enchilada sauce makes it easy to whip up a Mexican fiesta in no time. Learn how to can homemade enchilada sauce with this step-by-step guide.

My current quest is actually to replace all of the things that I threw out of my pantry with healthy, real food alternatives.

Well, OK, so maybe not everything. I’m not sure that anyone could come up with a healthy version of sweetened condensed milk. Le sigh.

Especially the mixes and boxed meals I used to use on THOSE nights.

You know the ones I mean.

I know that if I had those available I would be less likely to hit a drive through on the way home or slap a PB&J on the plate and call it dinner.

As I come up with replacements for those cans, boxes, and packages I will share them with you.

To get this thing kicked off I’m sharing my homemade enchilada sauce. Cuz, you know, Mexican food is my favorite food group!

And we love this homemade sauce because it is so much better than store bought sauce!

I love having this sauce on hand, because I use it in a lot of Mexican recipes. Beef enchiladas, chicken enchiladas, plain ole cheese enchiladas.

I also add it to beans and ground beef for a quick chili, and put it on tacos in place of taco sauce.

I chose to make a ridiculously large quantity so I could pressure can it and keep some on hand. Feel free to scale it (way) down. Or up.

The first thing you’ll want to do is to slip the skins from the tomatoes. It takes a little time, but it makes it easier later on.

Put water in a dutch oven and bring to a boil. Put cold water in your sink and add some ice.

I keep old milk bottles filled with water in the freezer for things like this. When you’re finished with it just re-freeze it.

When the water comes to a boil, put some tomatoes in it. Don’t crowd them. Leave them in for a slow count of 30.

Then put them in the sink or bowl of cold water.

When they’re cool enough to handle, get your cool little corer gadget and take out the cores.

Next, slip the skins off. Just grab them and pull. If you’ve gotten most of the core they should come off easily.

Quarter the tomatoes and put them in a large stockpot. Use a potato masher or some similar device and smash a bunch of them in the bottom of the pot.

You want to make sure that you have enough liquid in the bottom so that they don’t stick and burn. Cuz sticking and burning is bad.

Next, take your onion and chop it up. Just a rough chop. Everything is going to be pureed later. Then peel the garlic cloves.

Throw them in the pot. Well, not really throw because throwing food is not allowed in the house. So place them gently into the pot.

If you are using peppers, now is the time to add those guys too.

You can use a variety of your favorites here: mild, medium, or hot, green chilis, red chilis, Hatch chilis, jalapeno peppers, and any other red chili peppers you can name to come up with the perfect flavor just for you.

Remember to use gloves when chopping and seeding hot peppers.

And don’t touch your eyes with your hands while you’re chopping those suckers up! It hurts BAD!

I actually don’t use any extra peppers in mine. I’m kinda wimpy when it comes to hot spicy stuff.

But you spice it up as much as you want.

Now, bring it all to a boil over medium high heat.

After it comes to a boil, reduce the heat and simmer for 30 minutes. Leave the lid off so that some of the liquid boils away.

Take the pot off the heat and allow the tomatoes and stuff to cool for a few minutes.

Because now you’re going to put it all in the blender to puree it.

And if it’s too hot when you turn the blender on, the top of the blender will shoot off into the air with a sonic boom and the force of an atomic explosion and splatter tomato insides all over your ceiling.

Or so I’ve heard.

So, please, let it cool a little.

If you want to take the seeds out, now is the time to do it.

Pour it into a food mill and press it into a clean stockpot to get all the seeds out and make it smooth.

Or you can just get out your handy dandy immersion blender and leave everything right there in the pot. Which means lots less washing up to do!

And I’m telling y’all, since I got my immersion blender I will never go back to a food mill!

Bring it all back to a boil and reduce the heat again so it is just simmering. Simmer until it is the consistency that you want.

The time it takes to simmer down will depend on a couple of things.

The first is, are you using regular tomatoes or Roma or other paste type tomatoes? Regular tomatoes have more liquid in them than the paste tomatoes do, so they will take longer to thicken up.

And second, exactly how thick do you like your sauce? I like mine fairly thick, because I use it for other things besides enchiladas. So, when I go to make my enchiladas I usually thin it our a little.

If you are using pasty type tomatoes and you like your sauce on the thinner side, it might be ready for you as soon as you have pureed it.

On the other hand, if you are using regular tomatoes and you like your sauce thick, it could take and hour or so to get it to the right consistency.

But whichever way you like it, which it gets to the thickness that you are looking for, it’s time to add the chili powder and salt.

Now give it a taste and adjust the seasonings to your liking.

When the sauce is perfect, it’s time to put the enchilada sauce into pint sized canning jars. I use pints because that gives me roughly the same amount of sauce as a can from the store.

If you’re new to canning or just need a refresher, you can go here for information and general safety guidelines.

Canning enchilada sauce is pretty straight forward. For this recipe you need to use a pressure canner. Can in pint jars.

Process your lids as directed by the manufacturer.

Wash and rinse your jars and keep hot til needed.

Wipe the rims with a clean damp cloth and seat the lids.

Put on the rings and tighten finger tight.

Process at 6lbs pressure for 20 minutes, following the directions that came with your canner.

And be sure to adjust the pressure for your altitude using this chart.

After processing, allow the canner to cool down on it’s open. Then remove the lid and life the jars straight up and out of the canner with your jar lifter.

Put on a layer of towels to cool, undisturbed for 12 to 24 hours. After 24 hours, check the seals.

Anything that isn’t sealed goes in the fridge to be used within 2 or 3 days. Everything needs to be washed, labeled, and put in a cool, dry, place out of direct sunlight.

Home canned enchilada sauce will last for years if properly sealed and stored in a cool, dry place out of direct sun. Most people suggest you use it within 2 years for best nutrition.

Can I freeze this sauce instead of canning?

Absolutely! Put in freezer containers or canning jars to freeze. If using jars, leave an inch or two of headroom so it can expand without cracking the jar.
To thaw, leave on the counter at room temperature for a few hours, or overnight in the fridge.

How can I fix bitter enchilada sauce?

If your enchilada sauce is bitter, you can add just a smidge of sugar to correct it.

Can I waterbath can this enchilada sauce?

No. This sauce does not have the correct pH to safely waterbath can. It must be pressure canned.

More canning recipes you should try: 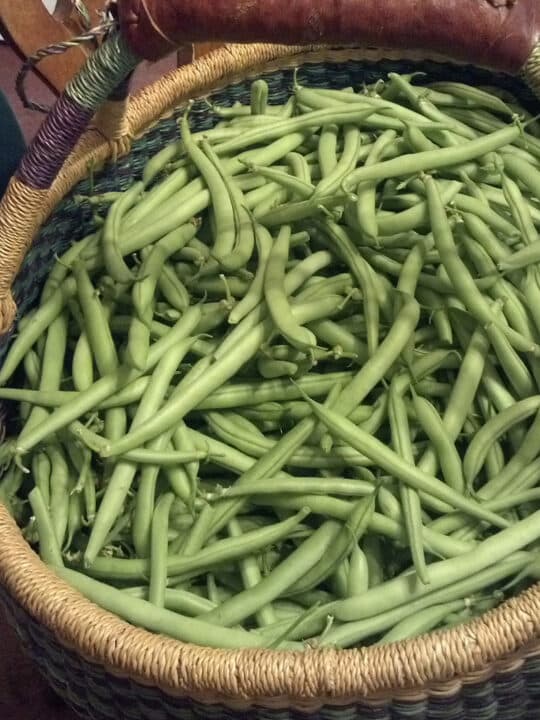 How to Pressure Can Asparagus Perfectly Step by Step

Pressure Canning Pork and Beans – A Step by Step Guide

A Fast and Easy No-Fuss Guide to Canning Rhubarb

This sauce is great for either freezing or canning, and the fire-factor is whatever level you want it to be.
5 from 1 vote
Print Recipe Pin Recipe
Prep Time 30 mins
Cook Time 1 hr
Total Time 1 hr 30 mins
Course Pantry Staple
Cuisine Mexican
Servings 8 pints
Calories 231 kcal

This enchilada sauce can be canned or frozen.  If you don’t add the chili powder, it makes a great tomato soup. As written, this recipe needs to be pressure canned. To use a waterbath canner, add 1 Tbsp bottled lemon juice to each pint jar before filling with sauce. Then process for 35 minutes.