Satisfy your comfort food longing with this thick and hearty Loaded Potato Soup! It’s like a loaded baked potato in a bowl.

And nothing says comfort like this amazing Loaded Baked Potato Soup.

It’s thick and hearty and full of all the goodies that come on a loaded baked potato!

One of the best things about this is that I can just grab a jar of home canned potatoes out of the pantry, and have this on the table in 15 to 20 minutes.

Our favorite spuds for this soup are Yukon Gold potatoes, with russet potatoes coming in 2nd place.

If you don’t have canned potatoes, you can pre-bake 2 large baking potatoes and cube them up instead.

If you menu plan, you can have baked potatoes a few nights before you make the soup and just toss a few more potatoes in the oven so they’re ready for later.

If you use baked potatoes instead of canned potatoes you need to add 1 cup of water to the soup when you add the potatoes.

We also like to use homemade cheddar cheese and sour cream in this soup.

There is something immensely satisfying about making something for dinner that comes from home made ingredients!

Oh, and the best way to serve this? In a sourdough bread bowl. Hands down favorite here.

But it’s great in just a regular ole bowl too!

This potato soup recipe has all the flavor of a loaded baked potato and has a chunky texture. If you prefer a creamy potato soup, you can use an immersion blender to make it smooth.

Already. Ready to do this?

BONUS: Using a Dutch oven for both frying the bacon and making the soup makes this a 1 pot meal!

In a large saucepan over medium heat, fry the bacon till crisp.

Remove from pan and drain on paper towels, reserving the bacon grease. When the bacon is cool, crumble it up.

Turn the heat up to medium high under the bacon drippings. Whisk in flour, salt, and pepper. Continue to whisk until smooth and golden brown.

Gradually add the milk, whisking constantly. And I’m serious about gradually, If you dump it all in at once you’re gonna get lumps.

And ain’t nobody got time for that!

A good whisk is one of your most valuable kitchen tools! I love this flat whisk and use it at least 3 or 4 times a week.

Bring the soup base to a boil. Cook and stir for 2 minutes or until thickened.

Add the quart of potatoes or the cubed baked potatoes and water. The water in the potatoes will thin out the soup base just a smidge.

Stir that up well.

Now add the cheese, reserving some for garnishing. Leave on the heat until the potatoes are heated through and the cheese is melted.

And finally, remove the soup from heat and whisk in the sour cream, crumbled bacon, and green onions or chives, reserving some of each for garnish.

Garnish with bacon, green onions or chives, and cheese before serving.

And seriously, give it a try in a bread bowl. You’ll thank me!

How long is potato soup good for?

Potato soup should be eaten within 3 to 5 days.

Can potato soup be reheated?

Absolutely! Put in a saucepan and heat over medium heat until warm, stirring frequently. Potato soup can sometimes separate, especially if it’s been frozen. Just use a whisk to combine it again.

Can potato soup be frozen?

Yes it can. Put in an airtight container and put it in the freezer for up to 3 months. To use, defrost in the fridge and reheat. 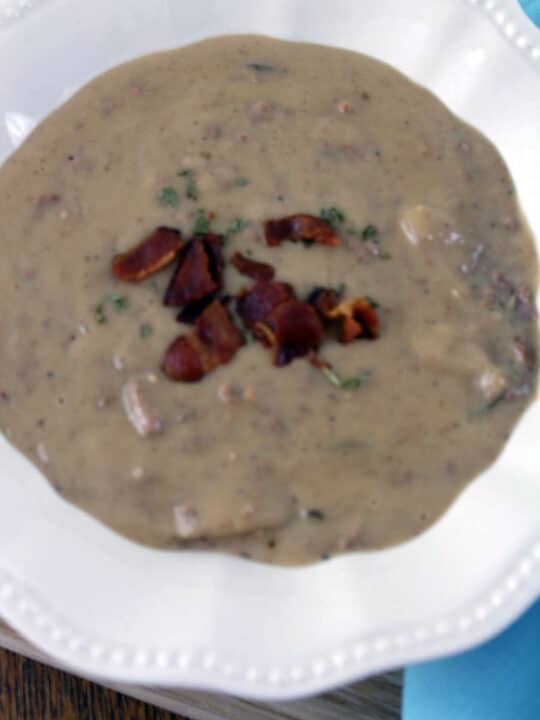 The Best Pumpkin Soup Recipe For A Delicious Family Favorite

I like to serve these in Sourdough Bread Bowls for a complete meal.